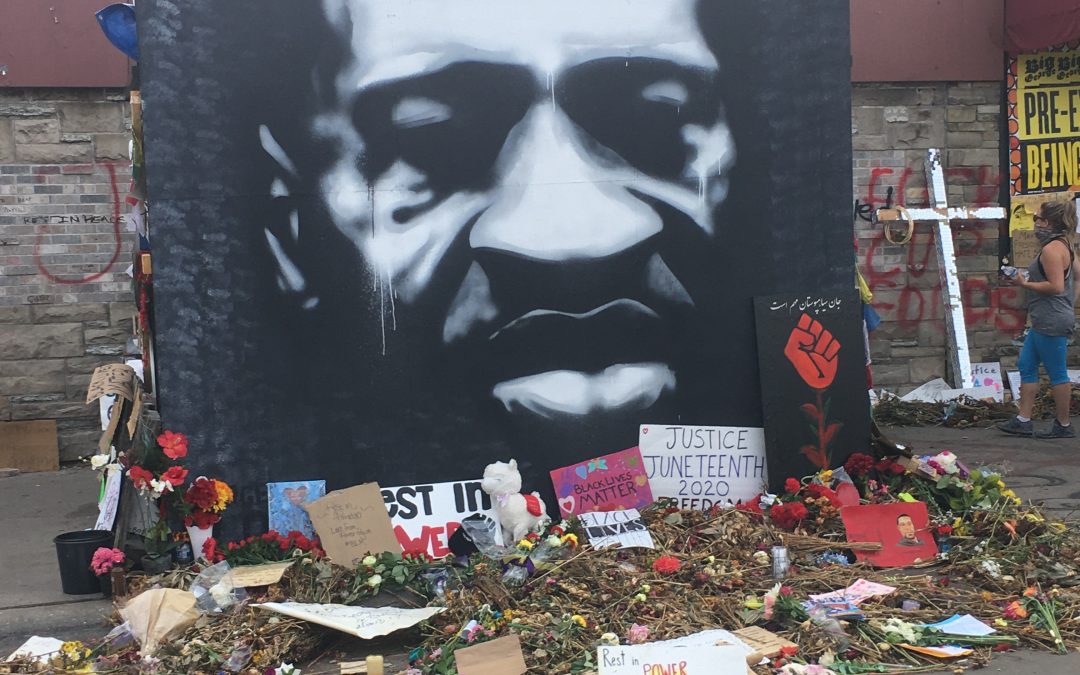 On May 25th, 2020, George Floyd was killed unjustly by Minneapolis police after passing a counterfeit 20 dollar bill at Cup Foods. The site of his murder at 38th Street and Chicago Avenue has become a memorial to him and brings to mind the suffering and racial inequities that Black and other peoples of color have faced in the Twin Cities and across the United States. Following his murder the TCBC Board of directors reflected on the club’s own shortcomings to promote a more welcoming environment for non-white riders. At that time we collaborated and agreed on the following statement on racism which was published in the June/July newsletter and is on the TCBC website homepage:

“As the largest recreational cycling club in the Twin Cities we realize that now is not the time to be silent. We are shocked and disturbed by the unjust deaths of George Floyd, Ahmaud Arbery, Breonna Taylor and so many others. We recognize the powerful effect that systemic racism has had on our black community, as well as other people of color. We don’t have a lot of answers right now. We are listening. We are learning.

We recognize that we, the Twin Cities Bicycling Club, have work to do to connect with all races and cultures. We believe that black lives matter and are committed to creating a more inclusive climate within our cycling community. More to come.”

Since then, I have had a chance to read a number of articles about the the inequities of Black participants in cycling as well as in the outdoors in general. I struggled to determine what the “More to Come” might actually be. I was inspired by Black rider Raequan Wilson and his #IRide4Them initiative. He rode 84.6 miles on 10 consecutive days this summer, beginning each day at a different site where a Black person was killed by police in Minnesota. . Since the club’s only activity this summer has been solo rides it occurred to me that a solo route that visits locations with Black historical significance would give our riders something to reflect on and take them to some places they might not be aware of in our twin towns. I reached out to fellow club member Dan Miller and Louis Moore from the Major Taylor Bike Club for ideas on meaningful stops to include in the route.

Since I’m not a TCBC ride leader and my route creating skills are rather weak, other board members suggested that I reach out to one of our leaders who has been creating and posting routes. I’ve ridden a number of Johnny Pugh’s routes this spring and summer and appreciate the way his routes get me to places I don’t frequently visit. So, I contacted Johnny and he was immediately in for the project. I sent him the seven locations I wanted the route to visit. Then, I set out trying to map the route out myself. The very next day I rode my route. I was taking a snack break at the Philando Castile Memorial site and I looked up to see another rider checking it out. It was Johnny! The route he mapped out was nearly the same as my own, though his was a little less treacherous. Afterwards we communicated back and forth, he tweaked his route slightly, and was able to post it a few days later.

My thanks to Johnny, Dan Miller and Louis Moore for their assistance. Louie also asked me to promote a project he is working on, a “Ride for Reparations.” I will share more with you about the ride as it comes to fruition. Ride safe everyone. Peace, John